There’s something I’ve learnt about the children of pilots (and I’m talking about youngsters here – please tell me teenagers are different?). A pilot’s offspring might fly before they take their first teetering steps; their school friends might hail from all over the world; and the class photo might resemble a Benetton advert. But when it comes to the countries they’re lucky enough to visit, the hotel we stay in seems to shape their opinion of the entire nation.

Son2’s favourite place is Birmingham. Why? Something he really liked about the hotel when we stayed there a couple of Christmasses ago (he’ll say it was the carpet, but I’m sure there must have been more to it than that). Italy. The best bit, according to Son2: the airport Sheraton hotel in Milan (which, incidentally, was designed to be a car park). South Africa. The crew hotel, the name of which I can’t remember but Son2 liked the sweets at reception.

So this year, we spent Christmas in Budapest.

It’s the most amazing city, blessed with beautiful architecture on every corner, romantic bridges, good food and an abundance of hot springs. In December, the city’s golden, twinkly lights take on an extra-special meaning against a (freezing cold) seasonal backdrop of brightly lit Christmas markets selling steaming mulled wine, ice skating at Vajdahunyad Castle, and festive decorations all over the city. 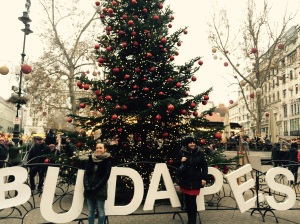 Fabulously festive but the hotel held all the appeal

At the market, I didn’t for one minute expect my sons to be into the craft stalls offering artisanal items, but I thought the food might interest them. And it did momentarily (while they were hungry). The goulash served in a huge, hollowed-out bread roll, the potato dumplings, the sausages and the fresh flat bread covered with grated cheese – it was all heartening fare on a night so cold your breath came out like a dragon’s puff. The best bit, for Son2, was the bubblegum marzipan. But once their appetites were sated, the calls began: “CAN WE GO BACK TO THE HOTEL NOW?”

On a visit to Buda Castle for a crisp winter walk with views of the city: “Can we go home?”

“We haven’t brought you to Hungary just to sit in the hotel room all day, you know … No really, we haven’t.”

At church on Christmas morning (okay so it was all in Hungarian, a beautiful but impenetrable language): “After this, are we going back to the hotel?”

At Heroes’ Square: “I WANT TO GO BACK TO THE HOTEL!” At this point, Son2 bunched his expression up into a question mark and clasped his hands together under his chin. “I want to play with my presents from Santa,” he pleaded. (Santa brought small stockings – because wherever you are, he’ll find you. PHEW!)

The bullet holes and shrapnel pockmarks on the Citadel fortress atop Gellért Hill took their mind off the hotel for a bit (their attention was actually fully engaged), and as we walked on in the footsteps of communism and the cold war and gazed up at the stark Statue of Liberty, the boys were still with us, absorbing DH’s history lesson about the Soviet “liberation” of Hungary during WW2. But it wasn’t long before we heard: “Let’s go back to the hotel! [Imagine a chant, like a woodpecker in your brain.]

“And can we get room service?” At which I rolled my eyes, not just out of their sockets but out of my actual head.

Sun worshiper, journalist, mother, pilot's wife and distracted housewife living in the land of glitz and sand
View all posts by Circles in the Sand →
This entry was posted in Children, Holiday, Parenting, Travel and tagged airline crew hotels, children and hotels, children of airline pilots, Christmas in Budapest, Christmas in Hungary, holidays with kids, Hungarian food, pilot family in Dubai, travel with children, travel with kids. Bookmark the permalink.