Tooth Fairy Trouble: How MUCH?

My oldest son appears to be hanging on to his milk teeth for dear life, but I hear from friends that when a child loses his or her first tooth, the question crops up: How much does the tooth fairy pay these days?

I’m also told that the amount you slip under the pillow soon becomes public knowledge, with every child (and mother) in your little un’s class finding out the exact denomination the wee pixie stumped up the next day.

The following story happened to a friend of mine and I’m retelling it here because I think it’ll resonate with anyone who’s ever wondered if they’ve paid too much, or too little, for a tooth…. 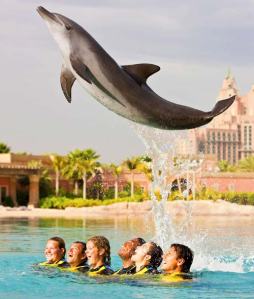 Did I mention the dolphins?

“Although few and far between, opportunities to get away from it all for a day or two pop up for most families. Time being of the essence, I started to consider a ‘staycation’ – a holiday at home – and what better place than the Atlantis?

Built on The Palm – land reclaimed from the sea and shaped into a colossal palm tree – guests not only stay in the most beautiful rooms and play around elegant pools and beach huts, they can also get up close and personal with dolphins. And to top it all, The Atlantis hosts Aquaventure, a magnificent aquatic theme park filled with so many different types of water slides and play areas it’s hard to cover them all in one day.

Sounds fabulous, doesn’t it? Of course, there’s something for everyone; of course, we all want to go; but of course, once a few enquiries have been made the shout comes up as “….HOW MUCH?” However, after more than four years in Dubai, eventually along came the opportunity to justify a visit – and how can we possibly not go just once?

Leap of Faith: Daredevil riders are catapulted through a shark-filled lagoon

The room was indeed splendid and thanks to some clever sliding door/wall trickery the children could even watch TV in the bath. The food was top class; again, “…how much…?” we cried weakly as we melted into some of the best Italian food we have ever had.

The highpoint, however, was indeed Aquaventure; two whole days of sliding and splashing, screaming and laughing, floating and gliding, at the end of which the children (and me!) crawled back to our room to sit, motionless, in the bath and roll straight into bed without a single protest.

This was especially so for one little boy, who, after weeks of wobbling, finally lost another tooth during our stay. The minor incident of only realising it was gone over a sumptuous breakfast resulted in DH making a break-neck dash to get back to the room before housekeeping to pluck this little tooth from between the sheets. Because of course, wherever you are, the Tooth Fairy will always come…. (phew!)

“Will the Tooth Fairy definitely know we’re at the Atlantis?” asked a tired DS that night, his head and body folding up into the sheets like an envelope. “Of course darling,” I crooned, “She knows exactly where you are,” and with that he fell fast asleep.

I was quick to follow; falling face down into those pristine white sheets, only vaguely aware that DH was leaving to go downstairs to meet up with some friends we’d bumped into that day.

On returning to our room, DH had the wherewithal to remember to remove the precious tooth and pop a note down in its place. In the UAE, even small amounts are represented in note form, 5dhs (approximately 85p or $1.35) being the smallest. 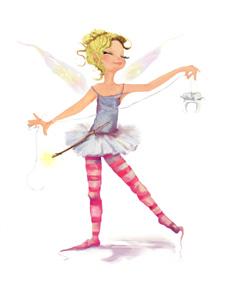 “How much did you get?” Even children newly informed about the Tooth Fairy are already in no doubt about the true relevance of her visit

But where could he find this ‘change’? He didn’t appear to be carrying any himself. Aren’t I always the person to be relied upon to supply just the very small amount he always seems to be without? Aren’t I always the one with that extra dirham required for the parking meter? After fumbling around for my bag in a very dark… (boy, those blackout curtains were good!)…. and did I say, glorious, room, DH finds my purse and wrestles a note from within.

Morning arrives, and the children wake up first, of course. As DH and I are dragging ourselves into consciousness, the squeals of delight start. I’m instantaneously horrified that I forgot all about Tooth Fairy Duty and equally grateful that DH had not.

“Mummy! Daddy!” shouts DS. “The Tooth Fairy! She found me!” We manage all the right noises as we struggle to remain horizontal with two excited children now bouncing up and down on our bed. “How much did you get?” asks DD.

We were powerless. Utterly powerless, just about managing, “Yes darling, THAT.IS.A.LOT of money. Yes, it must have been because she was The Atlantis Tooth Fairy. And…..er, yes ….. she’s very generous……”

The incident left us with two problems: How to not give a small boy nearly £34/$55 for one tooth; but worse, how to keep him quiet? We did manage to prise the precious note out of DS’s clutches – with the promise of an ice cream. But great were my blushes at the school gate as mothers cast those oh-so critical looks…”

Sun worshiper, journalist, mother, pilot's wife and distracted housewife living in the land of glitz and sand
View all posts by Circles in the Sand →
This entry was posted in Children, Dubai, Family, Parenting and tagged Aquaventure Dubai, Atlantis hotel Dubai, children losing milk teeth, Dubai tooth fairy, how much does the tooth fairy pay?, tooth fairy. Bookmark the permalink.

7 Responses to Tooth Fairy Trouble: How MUCH?